Professor Pedro Sauer was born and raised in Rio de Janeiro, Brazil, where from an early age, he began training in the martial arts. At age five, he began boxing and later took up Judo and Tae Kwon Do. At age fifteen, however, his friend, Rickson Gracie, invited him to train Jiu-Jitsu with his younger brother, Royler, who at the time was only nine years old. The outcome of this experience convinced him that Jiu-Jitsu was the most effective of all the martial arts, and he began training the very next day. Pedro was also a double major (Economics and Business Administration) in college. After graduation, he worked in Brazil as a stockbroker for eleven years before deciding to move to the United States and pursue a career teaching jiu-jitsu. In 1990, he moved to California with the original wave of Brazilian Jiu-Jitsu instructors. He lived in California with Rickson Gracie and trained daily with the Gracie brothers (Rickson, Rorion, and Royce), their father, Helio Gracie, their cousin, Renzo Gracie, and the Machado Brothers, as well as many others. 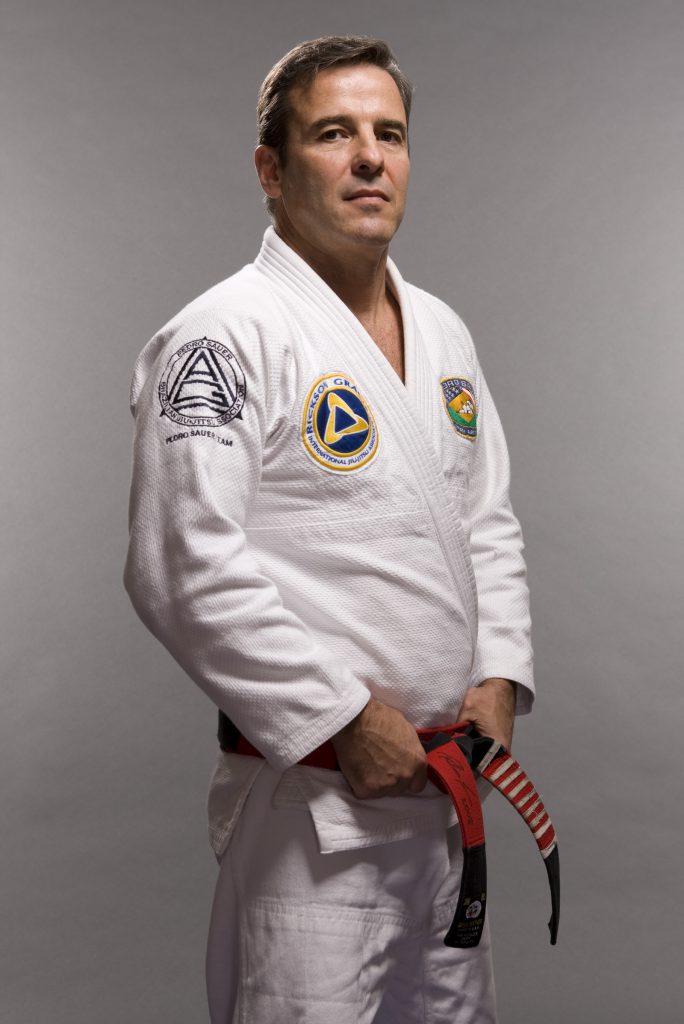 When Pedro Sauer was promoted to black belt, he received a dual black belt: One from Helio Gracie and the other from Rickson Gracie representing the many years of private and personal instruction received directly by Rickson. Rickson Gracie also presented Pedro Sauer with his 8th degree Coral Belt and Helio Gracie’s blessing. Long recognized for the superior technical efficiency of his jiu-jitsu, he then began his career as an instructor in 1986 when asked to teach with an organization known in Brazil as Corpo/Quatro (Body of Four) where he taught and continued his training under renowned Jiu Jitsu instructors Alvaro Barreto (who is a red belt master under Helio Gracie) and Silvio Behring (his father, Flavio Behring, is also a red belt master under Helio Gracie, and his brother, Marcelo Behring, is a world-reknowned Jiu-Jitsu champion).

After moving to Utah in December of 1990, he taught as one of only two non-Gracie black belts under the Gracie Jiu-Jitsu Academy (run by Rorion and Royce Gracie). In October of 1996, he became an official representative Black Belt Instructor under the Rickson Gracie American Jiu-Jitsu Association.

Currently, Pedro runs his main Jiu-Jitsu academy in Salt Lake City, where he has over 200 active students. He also has several affiliated schools across the country, and he visits them on a regular basis to give intensive instruction to the students and instructors. He is one of the most highly sought after instructors in the U.S. (of any martial discipline) and has presented hundreds of public seminars around the nation in Alabama, California, Colorado, Florida, Idaho, Kansas, Kentucky, Mississippi, New York, North Carolina, Oklahoma, Tennessee, Utah, and Virginia.

Pedro works extensively with military groups in Virginia, including the Marines and various groups from the Navy SEAL teams (including the snipers). He has also trained FBI and CIA agents in Texas. SWAT teams in Colorado and Utah. Also in Utah, Pedro has trained the police in Provo, Orem, DARE officers, the Sheriffs department in Salt Lake City, POST (Police Officer’s Standard Training) in SLC, and also the Orem Fire Department. Pedro’s skill, confidence, and fearlessness as a Jiu-Jitsu practitioner win him the respect of all that work with him. However, it is through his sincere personality, his passion for teaching, and his ability to transfer his skills to his students in an efficient and professional manner, that he has earned the loyalty of students across the nation, and has established himself as one of the premiere military and law enforcement instructors in the U.S.
Book A Class